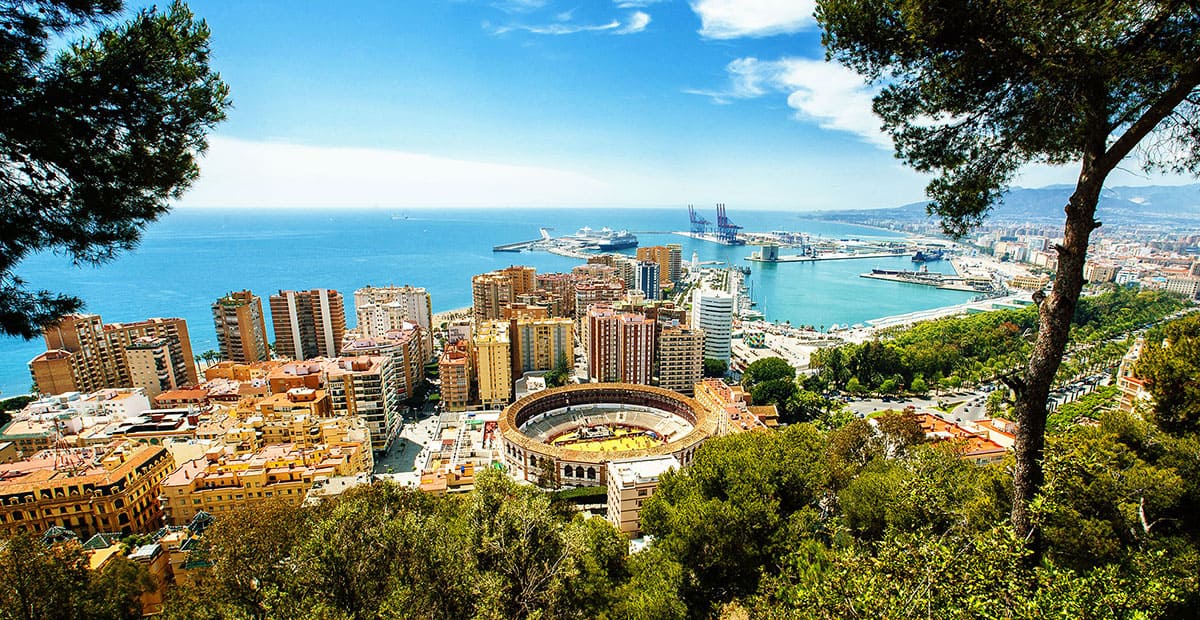 Málaga is a much underrated city and for many undiscovered (1h). Climb the Cathedral tower or make a hike towards the Gibralfaro castle for magnificent views on the city and the port of Málaga. Let the 1000 lights surprise you as soon as the sun sets and enjoy the moment. The city breaths culture and has many special monuments and buildings such as the Pablo Picasso and Centre Pompidou museum. Visit the Moorish fortress Alcazaba, the Teatro Romano, Castle Gibralfaro, the bull fight ring ‘Plaza de Toros La Malagueta’. An absolute must-see is the fresh market Atarazanas : Atarazanas means in Arabic ‘place where ships are repaired’. Till the 19th century this hall was used as a shipyard. Since then it has become the fresh market where local traders display and sell their produce. Also the Cathedral ‘Basilica de la Virgen de la Victoria’ or another of the many magnificent churches are more than worth visiting. Taste local wines at the oldest bodega in town Casa Antigua or El Pimpi.

A day trip (1.5h) to Granada is an absolute must! Taste the Moorish legacy and visit the impressive Alhambra (Moorish castle and palaces), or the Moorish quarter Albayzin in Granada, enjoying the spectacular view on the Sierra Nevada. The beauty of the Alhambra combined with a stroll through the Medieval city centre will impress you without doubt (please mind to order your tickets for the Alhambra Palaces in time – feel free to ask us). 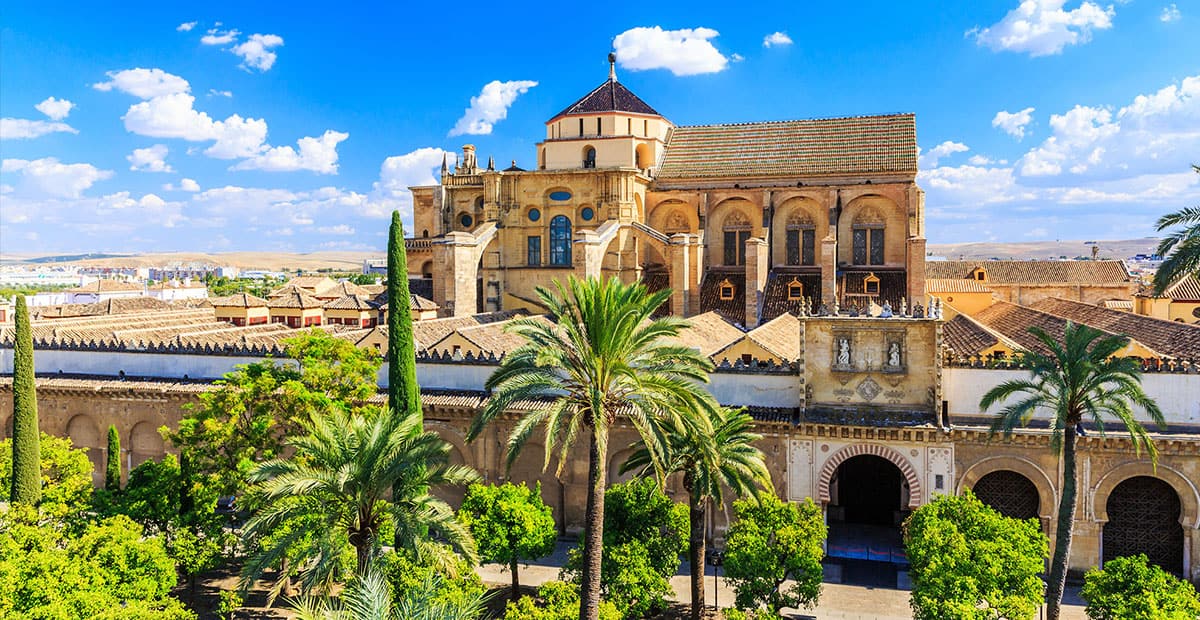 Córdoba (2.5h) is known above all for its Mezquita, the third biggest Mosque in the world. You find more than 850 pillars in red and white. Before 1523 even 400 more, but they had to make place to build a cathedral in the middle of the Mosque. When the cathedral was finished, Charles V regretted he had ordered its construction. The fascination however, has not lessened and the building is even more spectacular. Córdoba is a city full of history. The complete old town has been nominated World Inheritance and is the birth city of philosopher Seneca.

Next to the Mezquita, Córdoba fosters other cultural gems such as the Alcázar de los Reyes Cristianos. The Roman bridge and Jewish quarter (Juderia) with the medieval cobbled streets and synagogue have been maintained in perfect condition. Throughout the city you can find many buildings with Roman, Arabic, Jewish and Christian origin. More than worth your discovery! 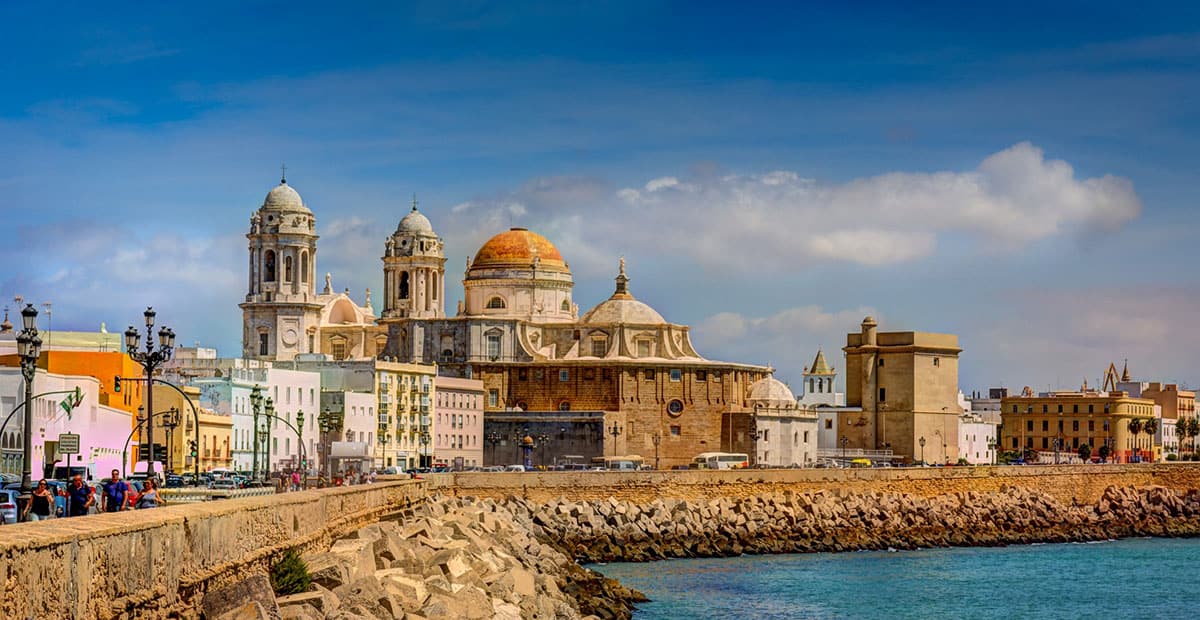 The dazzling white city of Cadiz (3h) with its mysterious streets and towers outlooking on the city , is the oldest town in Europe. Standing on the cape, the Castillo de Santa Catalina catches your eye immediately. From its gardens you can enjoy magnificent views on the beach and city. The golden dome of the beautiful cathedral stands out in the view  and you can even climb the bell tower. The narrow streets link the beautiful squares of the city. Pay a visit to the Oratorio de la Santa Cueva. In this baroque church you can admire frescos by Francisco de Goya and a  Madonna by Murillo. Spectacular views await you from the Torre Tavira (look for the camera obscura). Through diaphragms and mirrors …., you know what, ..go and see for yourself.

Strolling through the old town centre of Marbella (1.5h) and then sit on the Plaza de los Naranjos, the famous square with orange trees. Or go and see the rich and famous with their yachts and exclusive cars in the port of Puerto Banús.

Ronda (2h) is one of the oldest towns of Spain and known for its spectacular location on a rock. You enjoy breathtaking views on the gorge de Tajo.

Ronda offers a mix of Moorish buildings, churches and arenas of which the oldest in Spain is to be found in ….Ronda. Once a year , they still have a bull fight in this arena whilst during the year it opens as a beautiful museum. The Arabic baths of Ronda” Baños de los Arabes” are the best preserved  in Spain. Water used to be pumped from the river and guided through the viaduct into the baths. Impressive when you know this was engineered and built between 1136 and 1206 by engineer Abu al Tz ibn Razaz Al-Jazari. But the symbol of Ronda remains “the new bridge” from 1793.